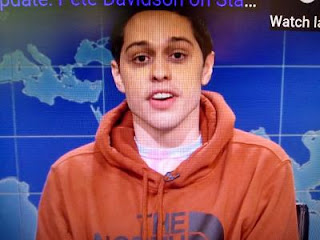 There's nothing funny about rooting for tyrannical government.

People who laugh at it have no clue living under that kind of system feels like.

It's been a number of years since Saturday Night Live stopped being funny.  But, it's still on the air for some reason and the least of it has to do with making people laugh.  Like anything else on the left, SNL has more to do with providing therapy for Libs than to give people a chuckle.  Nevertheless, the days of Bill Murray, Eddie Murphy, Billy Crystal are way, way long gone.

The “King of Staten Island” comedian riffed on the rallies outside the bar that declared itself a COVID-19 restriction “autonomous zone” when he appeared on the “Weekend Update” segment.

“I saw the protests, people were outside the bar shouting about freedom, talking to cops, chanting that they should arrest the governor so I just assumed that it was a typical last call,” Davidson said.