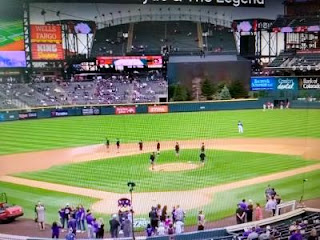 Come to Coors Field for the grass!

The above headline was made in jest.  However, this is what MLB has set up for themselves by entering the political realm.  Baseball Commissioner Bob Manfred is an idiot for believing the lies told about Georgia's new voting right law.  Sports in general need to conduct their businesses apolitically.  Don't get involved in political concerns and instead nvite fans of all political stripes their sporting events.

That's how it ought to be done!

But, Manfred, the moron , chooses a political view that automatically alienates the other side.

What sense does that make, Bobby?

The 2021 MLB All-Star Game will be moved to Coors Field in Denver, home of the Colorado Rockies, The Post’s Joel Sherman confirmed on Monday.

On Friday, the league announced it was pulling the Midsummer Classic — and the 2021 MLB Draft — out of Atlanta after Georgia’s legislature passed a series of controversial voting reform laws last week.