Phony Eric Adams doubles down on far-left criticism: ‘This is not a socialist country’ Real Time with Bill Maher (HBO) 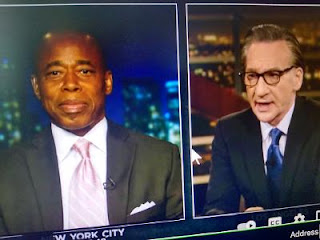 Do not believe a word coming out of Eric Adams mouth!  As I've been saying since this clown got the Democrat nomination for mayor of New York.  Eric Adams is another empty suit running as a Democrat.  All of a sudden Adams is running as a conservative against the progressive policies running New York?

Don't fall for his lies!

“This is not a socialist country, let’s be clear on that,” Adams said during an appearance on HBO’s “Real Time with Bill Maher.”

“This is a country that believes in giving people the opportunities [so] that they will be able to succeed and excel in this country,” he added.

The former NYPD Captain has found himself at odds with the city’s left-wing after saying in a campaign speech in Queens that he is running against the socialist “movement” across the country, specifically naming the Democratic Socialists of America.