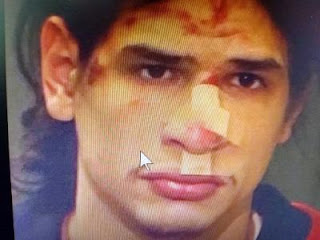 This was what the NY Post's headline should have been.  I think it's more accurate considering a career criminal was walking our streets free as a bird.

How is NYC in the shape that it's in?  It's progressive policies in the mayor's office, the city council, and the state capital.  Who are the culprits?  Democrats are in full control of all these branches of government.  It's on them!

NY Post reports a reputed gangbanger with at least 25 prior arrests shot an NYPD lieutenant assigned to thwart surging city gun violence during a “fierce” struggle with cops in the Bronx, authorities said Saturday.

The lieutenant was among at least four cops on patrol just before midnight in Morrisania who spotted Jerome Roman — a 26-year-old member of the Lyman Place Bosses gang, a subset of the Bloods — holding a firearm, police said.

When cops confronted Roman — who sources said is known to pack heat and is on the NYPD’s criminal possession of a weapon recidivist list — he bolted about 50 feet before they tracked him down, Police Commissioner Dermot Shea said at an early morning press briefing outside Jacobi Medical Center.