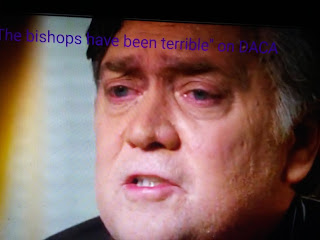 I like Steve Bannon a lot.  And I think he'll do a lot more good for President Trump on the outside than from within the White House.
Just watch!


Breitbartreports former White House Chief Strategist Steve Bannon does not need lectures on race relations from “limousine liberals” and the media elites who hang out in largely homogenous crowds and whose oh-so-progressive-and-forward-looking organizations and outlets do not have the effortless diversity of Breitbart News’ masthead.

In a 60 Minutes interview, Bannon told CBS anchor Charlie Rose that he was raised in a desegregated neighborhood on the North Side of Richmond, Virginia, that is “predominantly black.”

“I went to an integrated school, a Catholic school. I served in the military,” he continued. “I don’t need to be lectured … by a bunch of limousine liberals, okay, from the Upper East Side of New York and from the Hamptons … about any of this. My lived experience is that.”

Bannon also suggested that left-wing activists and the legacy media may be trying to play the race card because they know how successful and unifying the economic nationalist agenda, which Bannon said will unify Americans of all races, nationalities, religious, and sexual orientations—can be. Bannon has consistently denounced ethno-nationalists and white supremacists.