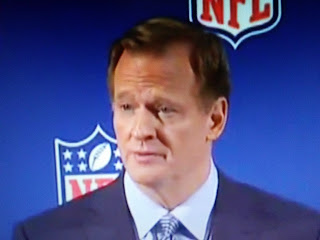 He doesn't understand this decision will result in a permanent loss of fans viewership.
I guess he has no interest in making the NFL a thriving business as it used to be.


Fox News reports NFL Commissioner Roger Goodell said he believes all players “should” stand for the national anthem — but stopped short of imposing a rule on standing for the playing of “The Star-Spangled Banner.”

Goodell, speaking to reporters on Wednesday, said it is important for the league and its players to honor and respect “our flag and our country.

“We are not afraid of the tough conversations,” he added. “Out of those discussions, [players] understand that owners and the NFL do really care about the issues.”