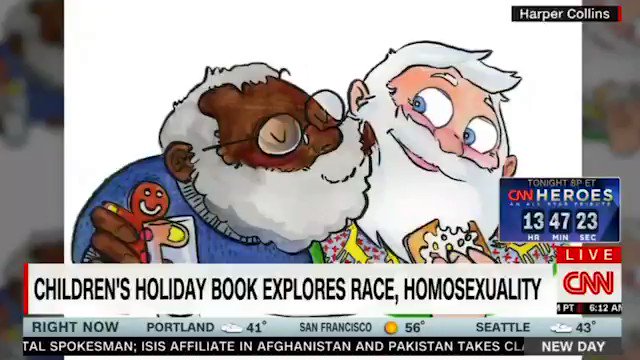 We can never underestimate Liberals capacity to rip apart tradition just for the sake of doing it.
A Black Santa Claus is nothing new.  That's been around since All in the Family was on the air in the 70s.  But, a Gay Santa?  That's a bride too far!


Gateway Pundit reports the author Daniel Kibblesmith reportedly came up with the idea for the book while he and his wife were discussing how their future children will be told that Santa is black — though he is not black himself. They decided that since mall Santas are traditionally white, they will just tell their children that those are “Santa’s husband.”

The idea led to this book, designed to intentionally upset people who believe that there is a war on Christmas.

“In this witty and sweet illustrated Christmas tale, humor writer Daniel Kibblesmith introduces us to Mr. and Mr. Claus, and gives us a glimpse of their lives together. We see the Clauses sitting by the fire at their cozy North Pole home, vacationing at the beach, having an occasional disagreement, celebrating their wedding day, and comforting each other when some loudmouth people on television angrily dispute Santa’s appearance and lifestyle,” the book’s description on Amazon reads.