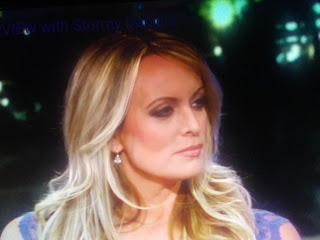 It's amazing how much traction this bimbo is getting and Trump-hater Larry Kimmel gladly puts her on his show.

AOL News reports pornographic film star Stormy Daniels on Tuesday added another twist to the did-they-or-didn't-they saga of whether she had an affair with President Donald Trump several years ago, saying she didn't know where a denial of the alleged affair issued in her name came from.

In a short statement attributed to Daniels and provided by her publicist on Tuesday, the actress was quoted as saying, "I am denying this affair because it never happened."