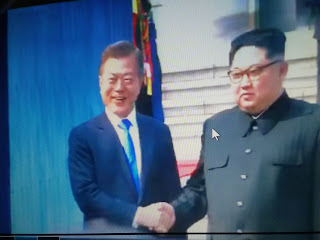 This whole thing is happening because President Trump dealt with Kim Jong Un with strength and not appeasement like prior presidents.
The corrupt media will never acknowledge it.

NewsMax reports the golden doors on the stately North Korean building swung open and leader Kim Jong Un, in a black Mao suit and surrounded by a gaggle of officials, descended steps towards the border.
Not since the 1950-53 Korean War had a North Korean leader set foot on South Korean soil.
With a smile, Kim stretched out his hand toward a waiting, and smiling, South Korean President Moon Jae-in, who stood between the squat, blue buildings that straddle the border at Panmunjom.
The village is one of the few places where there are no barbed wire fences or minefields between the two countries, separated by a conflict that ended with a truce, not a treaty, in 1953, meaning they are still technically at war.
"I was excited to meet at this historic place and it is really moving that you came all the way to the demarcation line to greet me in person," Kim said as he grasped Moon's hand across the border.