Mad Maxine Waters Reacts to Kanye's Praise of Trump: He 'Sometimes Talks Out of Turn' 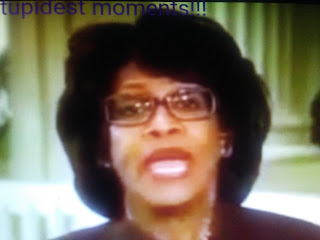 Oh, I see.  If a Black person speaks outside the Liberal orthodoxy that predetermines Blacks can only be Democrats, he's speaking out of turn.
The only one out of turn is Maxine Waters existence on this Earth.

Fox News reports California Rep. Maxine Waters is going after a new target: rapper Kanye West and his praise for President Donald Trump, according to remarks obtained by Politico.

Waters, a Los Angeles Democrat who has called for Trump to be impeached, attended an event in Oakland, Calif. with members of the Congressional Black Caucus.

Politico reported that they asked Waters about Trump's claims of record low black unemployment figures and of praise the president has been receiving from West.
Waters said West is a "creative young man" and credited him with creating "revolutionary material" for African-Americans.

But, she warned that West "talks out of turn".