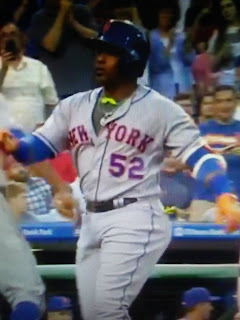 A few weeks ago I wrote a piece strongly suggesting the New York Mets should sue outfielder Yoenis Cespedes  for breach of contract due to his inability to play.

It is my belief that Cespedes, although a gifted athlete when he plays, is a dishonest character who would rather collect millions from the Mets than earn it on the field.

Cespedes knows that the Mets are a very poorly run team with a dimwitted owner, Jeff Wilpon, at the helm.  In 2017 the Mets signed him to a four year 110 million dollar contract.  All of a sudden after signing for the big money, he can't seem to stay on the field.

Prior to his big pay day:

But, 2016 after playing his first full season for the Mets he dipped to only 132 games .

Yesterday, Cespedes announced that he needs surgery  for both his heelsand It requires an 8 to 10 months of recovery.  If he had the surgery today, it would barely make him ready for the 2019 season.

This guy is living on welfare, not baseball!

If I ran the Mets, I would've hauled him to court weeks ago for breach of contract and let him prove he's actually hurt.  And if he's indeed chronically inured, then I would argue that he signed a contract in bad faith refusing to disclose a chronic condition that keeps him from playing.  That's what a professionally run organization would do.  Unfortunately, that's not the Mets.

Cespedes began his playing career in 2012 after escaping from Cuba. He claims he's had this problem with his heels for 15 years. The below video was prepared by his agents for perspective teams interested in signing him. It shows Cespedes performing various feats of athleticism. Do you see any evidence of bad heels?
at 7/21/2018 06:59:00 PM