Trump says looking more and more like his campaign was 'illegally being spied upon', new documents released on Saturday 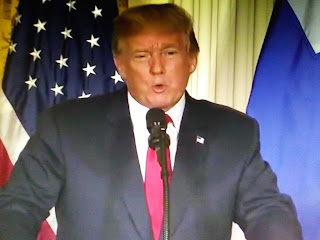 In his tweet Trump is asking GOPers in Congress to get tough.
Are they?  Not all of them and that is the problem that plagues the party and this president.

AOL News reports U.S. President Donald Trump said on Twitter on Sunday it was looking more and more like his campaign for the 2016 presidential election had been illegally spied upon.

Trump issued the tweet after saying documents about his former presidential campaign adviser Carter Page confirmed with little doubt that the Department of Justice and Federal Bureau of Investigation had misled the courts.

The FBI released documents on Saturday related to the surveillance of Page as part of an investigation into whether he conspired with the Russian government to undermine the election.

Looking more & more like the Trump Campaign for President was illegally being spied upon (surveillance) for the political gain of Crooked Hillary Clinton and the DNC. Ask her how that worked out - she did better with Crazy Bernie. Republicans must get tough now. An illegal Scam!
— Donald J. Trump (@realDonaldTrump) July 22, 2018