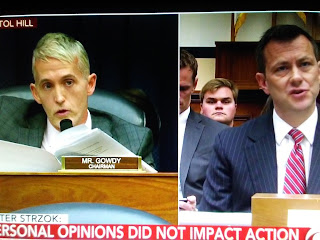 When Peter Strzok says he didn't have any political bias is simply the biggest lie told in the 21st century.

A lengthy and fiery exchange between the two ended with a sharp rejoinder from the former prosecutor.

After Strzok said he was booted from the Russia probe over an "appearance" issue and not because of "bias," he said he didn't appreciate Gowdy saying otherwise.