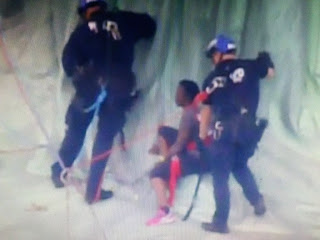 What a freaking lunatic!

Fox News reports a woman was escorted down from the Statue of Liberty on Wednesday after she scaled the bottom part of the national monument in protest of U.S. immigration policy, sparking a nearly four-hour standoff with authorities.

The person, who appeared to be sitting near the feet of Lady Liberty — roughly 25 feet above the monument's observation point, was apprehended by police Wednesday, hours after she ascended the monument on Independence Day.