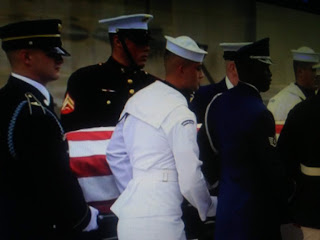 And still John McCain hasn't been buried.
Maybe they'll plant him after the midterms.

Fox News reports Meghan McCain and President Barack Obama took apparent swipes at President Trump on Saturday in a eulogy for John McCain -- who sparred with Trump on a number of occasions before his death last week of brain cancer.

"The America of John McCain has no need to be made great again because America was always great,' McCain's daughter said, in what appeared to be a reference to Trump's presidential campaign slogan: "Make America Great Again."

The remarks were made during a funeral service at Washington National Cathedral for the Arizona Republican, who died last week of brain cancer.
Obama's jabs were more subtle but still appeared to be directed at the current occupant of the White House. He derided those in politics who traffic in "bombast and insult and phony controversies and manufactured outrage."

If the McCain family had any class, President Trump would not have been disinvited to the funeral.  Sorry, but John McCain goes to his maker with bitterness in his heart.  That's not a good look and there's nothing he can do now to fix it.
at 9/01/2018 03:36:00 PM