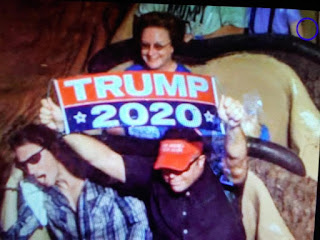 Would the same hold true if somebody sported a Elizabeth Warren or Alexandria Ocasio-Cortez 2020 sign?

NY Post reports Walt Disney World banned an ex-Marine from the Upper West Side from all its parks last week for waving a “Trump 2020” banner on Splash Mountain, he says.

“I held up the sign for two seconds so I can take a picture,” he told The Post. “You’re allowed to hold up signs on Disney rides — cameras, cellphones, and other stuff like that. People have been doing it for years. They just kicked me out ’cause of the context of the sign.”