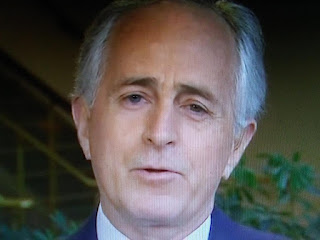 Bob Corker is a yellowbelly coward
who never had the stones to fight Democrats the way Trump does.  Him going on CNN, a fake news network, says it all the kind of man Corker is.  He won't be missed in the GOP.


Fox News reports Sen. Bob Corker took a shot at President Trump on Sunday amid the ongoing partial government shutdown, accusing the president of being involved in a “made-up fight” and telling Americans to focus on a “significant thing like pulling out of Syria” -- sparking a war of words between the two Republicans.

Corker, R-Tenn., the retiring junior lawmaker from Tennessee, has stepped up his criticism of Trump since announcing he would not run for a third term and -- in the final weeks of his term -- Corker has blasted the president for both the government shutdown and for his announcement that he was pulling U.S. troops out of war-torn Syria.

“This is a made up fight so the president can look like he's fighting and winning,” Corker said of the shutdown on CNN’s “State of the Union.” “This is made up fight. I would tell Americans to turn this off and focus on a significant thing like pulling out of Syria.”