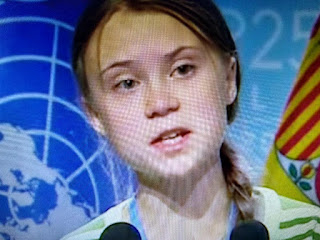 This chic really is something else.  Not only is she's full of it.
But, she has to lie and misrepresent herself to the world!

A German railway company has taken back an apology they made to Greta Thunberg after they realized the climate activist wasn’t schlepping it on the train’s floor but instead was treated “friendly” in first class.

The rail company was responding to an image Thunberg tweeted of herself sitting amid bags and suitcases on the floor of what she called “overcrowded trains through Germany.”