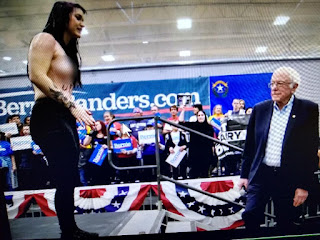 Whoa!  Poor guy has already had a heart attack.  What is she trying to do?  Take him out?

De Blasio had just introduced Sanders to the crowd in Carson City as the “next president of the United States,” when Sanders entered the stage with his wife as the song “Power to the People” played.

That’s when a fully clothed woman jumped up and tried to wrest the microphone out of the Vermont senator’s hand, before grabbing another one from the lectern, and started speaking about the candidate’s support for dairy farmers