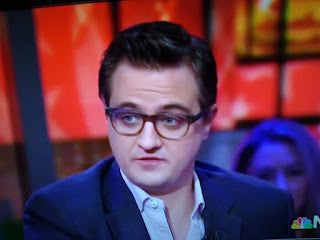 Chris Hayes is literally insane along with all the others who work for MSNBC.
It's funny how white Liberals take it upon themselves to speak for black people.  The real 'white  supremacy' falls upon Democrats who started the KKK, created Jim Crow laws and such.  The tragedy is that the same Democrats are in control of the public school system and they have indoctrinated blacks into believing a bunch of lies.  However, the lies are finally falling apart and many blacks are leaving the Democrat party.

Free Beacon reports MSNBC anchor Chris Hayes erased the existence of black Republicans Friday when he asserted that there's "only one party" to which African Americans can belong.

"White people in America have two parties to choose from and between those two parties they sort in all kinds of ways," Hayes said, describing different white voter profiles but asserting that all types of black Americans must join "the Democratic Party, because there's only one party they can be a part of because of the nature of structural white supremacy in America in the political coalitions."