Don't fall for mainstream media manipulation: Trump vs Fauci conflict-There is none! 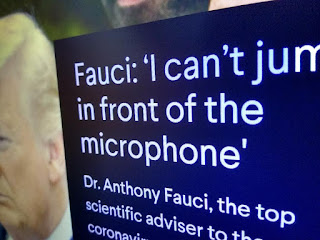 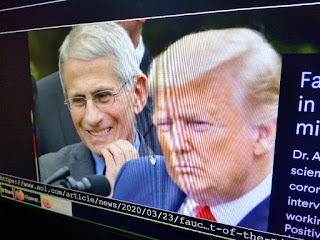 Here's a headline on my mainstream media newsfeed:

Fauci: 'I can't jump in front of the microphone '

This headline is meant to confuse readers into thinking President Trump and Anthony Fauci don’t get along, or they're not in agreement in fighting coronavirus.  This is how the MSM chooses to spin the news and attack President  Trump.

Fauci is a scientist that believes in date and never speaks off the cuff.  He'll never say anything that scientific date doesn't prove or disprove.  That's what his job is.  He's also a bureaucrat that's beam working for the federal government since the Ronald Reagan administration.  So he's steeped in red tape and process.

President Trump came from the private sector.  He's a 'can do' guy that expects problems be solved quickly and effectively.  There are no excuse, make it happen now!
So these are two mindsets with the same goal-end the coronavirus crisis.  What the media has been doing for weeks is to take what Fauci says and give the impression or negative spin that he and Trump disagree.

That's never been the case!

Readers of the MSM (ABC, NBC, CBS, NY Times, The AP, Washington Post, MSNBC and CNN) need to know they have an agenda to bring down the Trump administration at any cost.  They are dishonest, arrogant, misleading and deceitful.  They lie to their readers and viewers on a daily basis and people need to finally wake up to it.

President Trump closed travel to China back in January.   Why?  He heard about the outbreak in Wuhan China and made the decision to protect the American people.

But, did the MSM cover the outbreak?  No!  They were too busy with 24/7 coverage of the impeachment.  The MSM  failed to warn the world about Wuhan China.

Wake up folks and stop being played by the MSM!