Getting Political: NYC Socialist-Absentee Mayor Bill de Blasio rips President Trump, says he ‘will not lift a finger’ to help hometown with coronavirus 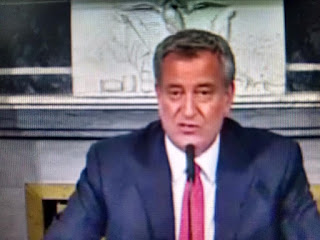 On a good day Mayor Bill de Blasio show up to City Hall at around  11:00 am.  Stays around a couple of hours then leaves.
Some say he goes to a gym in Park Slope, Brooklyn or goes off to where ever else.  This is his pattern as mayor of New York.  He stayed away from New York weeks at a time while he ran for president.  But, he never managed to get over .05% in the polls.    As a result it's no coincidence that crime before the coronavirus ever started, is up.  New York has become a homeless camp under the leadership of De Blasio.  So maybe the Covid-19 crisis is a good thing because this is the most hours he's ever put into the job!   Lord, knows he wasn't earning his pay before.


Fox News reports New York City Mayor Bill de Blasio had a grim prognosis for his city during the coronavirus outbreak and claimed Sunday that if President Trump does not do something soon, it will cost people their lives.

Roughly a third of call cases in the U.S. are in New York City, resulting in much of the city being shut down, with all nonessential workers being told to stay home. The mayor told NBC's "Meet the Press" that he does not expect the situation to improve any time soon.

“The truth is," de Blasio said, "It’s only getting worse.”