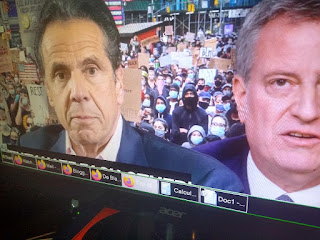 Bill de Blasio is following the David Dinkns playbook, which is to do nothing.
However, with all repect to Rudy Giuliani, Andrew Cuomo is just as horrible.

Fox News reports Mayor Bill de Blasio called on Gov. Andrew Cuomo to apologize to the NYPD, as the feud between the two Democrat politicians showed no sign of abating despite New York City being ripped apart by rioting.
In the latest salvo between the two, de Blasio said Cuomo owed an apology to the cops who have been battling rioting over several nights in the city.
“He dishonored the men and women of the NYPD in an absolutely inappropriate way for any leader to do,” de Blasio said on 1010 Wins talk radio Tuesday.
“Any elected official who blames the NYPD while they were out there fighting in the streets to restore order, protect people – that’s disgraceful.”

The mayor added: “He owes an apology to 36,000 hardworking men and women who have been putting their lives on the line for all of us.”
De Blasio’s comments come after Cuomo called de Blasio’s handling of riots in the city a “disgrace”, even going as far as saying he has the power to “displace” the mayor.