BLM, social justice messages to be left 'off the floor' next season after TV rating drop 50%: NBA commish 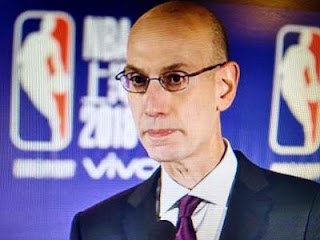 It was an extremely stupid decision to have social justice messages on the court in the first place.

Politics and sports is like oil and water.  They don't mix!

Fox News reports NBA Commissioner Adam Silver made an appearance on NBA Countdown earlier this week to talk about the social justice messages that the league has on their basketball courts, as well as on players’ jerseys.

Silver says these messages will be “largely left off the floor” next season.

“We’re completely committed to standing for social justice and racial equality and that’s been the case going back decades,” Silver said in the interview. “It’s part of the DNA of this league. How it gets manifested is something we’re gonna have to sit down with the players and discuss for next season.