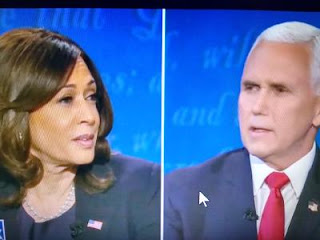 In a calm and measured way Mike Pence showed the world that Kamala Harris has no business being president of a neighborhood bodega let alone president of the United States.

While Harris made smirks, physically gyrated in her seat like a four year old, Pence reminded the country of Harris's radical positions, her ineffectiveness as AG for California, and her failed quest to become president.

She's not a likable person and her 6% approval rating when she ran for president shows it.