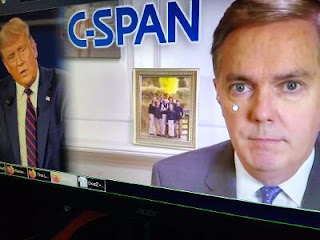 I knew Scullly was a lying Son of a Bitch!

He's a bum and the commission of presidential debates is a corrupt organization that was protecting Joe Biden.


Fox News reports C-SPAN has suspended political editor Steve Scully, who was at one time slated to moderate a presidential debate, indefinitely after he admitted he lied about his Twitter being hacked when a message to former Trump aide turned adversary Anthony Scaramucci emerged.

Scully, the "Washington Journal" host who was selected to moderate the now-canceled town hall event, went viral last week after a tweet sent from his account indicated he had reached out to former White House Communications Director Anthony Scaramucci, something he later alleged was the result of being hacked.