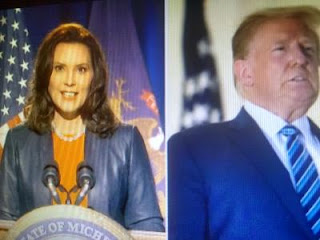 It's sad how this incompetent governor chooses to go political on Trump.  She's just as
bad as NY Gov. Andrew Cuomo who is intentionally locking down her state to screw Trump.

NY Post reports President Trump on Thursday night criticized Michigan Gov. Gretchen Whitmer, while denouncing any “extreme violence” in America, hours after authorities arrested a number of militia members in the state who were plotting to kidnap her.

Trump, writing on Twitter, said he expected Whitmer to thank him because the Justice Department helped arrest the plotters — but instead, he claimed, she suggested he is a racist.

“My Justice Department and Federal Law Enforcement announced today that they foiled a dangerous plot against the Governor of Michigan,” Trump wrote in a series of tweets.