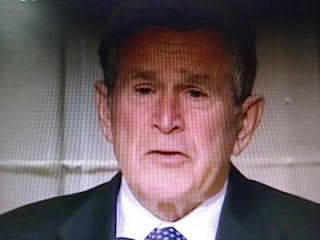 As a member of the GOP base and a MAGA voter, I like to thank George Bush for his service as president.

Liz Chenney needs to get bounced on her ass once and for all.

Freddy Ford, Bush's chief of staff, said that the former president will thank the top House Republican for her service - just weeks after her vote to impeach then-President Donald Trump.

But he wouldn't be drawn on whether he would back her ahead of a tough 2022 Primary.

'We aren't thinking about the next election cycle yet,' Ford told CNN when asked , adding that they were a few months ahead of such a decision.

'But I do know that President Bush is planning to call VP Cheney tomorrow for two reasons: to wish him a happy 80th birthday, and to thank him for his daughter's service,' he added.