These 10 NeverTrumpers House Republicans voted to impeach Trump on Wednesday 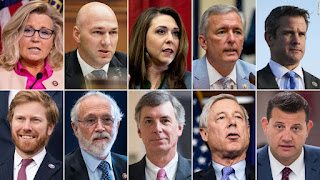 These are the ten GOPers who committed political suicide today.

Starting with Liz Chenney who believes in endless wars as she represents the military industrial complex.  Her days in leadership are numbered.  Say goodbye to The 10 who will be primaryed.