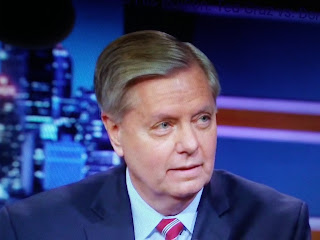 This impeachment is a colossal waste of time.   But, the Dems want to waste it because they have nothing to offer the American people and the horrible way they govern.

AOL News reports on Monday’s Fox News Primetime, Senator Lindsey Graham discussed the upcoming impeachment trial of former President Donald Trump. Trump was impeached for his alleged involvement in the riot at Capitol Hill on Jan. 6th. Graham believes the upcoming trial is unnecessary and strongly opposes witnesses being brought forth to testify.

“To my Democratic colleagues,” warned Graham, “if you vote to call one witness... get ready for a long trial. I think we know what happened that day. But if you open up that can of worms, we’ll want the FBI to come in and tell us how people actually pre-planned these attacks and what happened with the security footprint at the Capitol.”

Lindsey Graham repeats his warning not to call witnesses during the trial. He says if Democrats vote to call a single witness, “we’ll want the FBI to come in” pic.twitter.com/FqtDfUBWdL