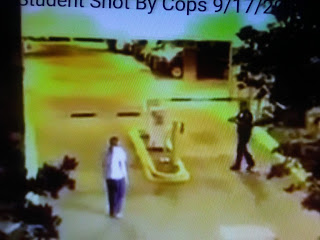 I don't think this story won't get a whiff of national attention because the college student was White.
Also, a case can be made that this was suicide by Cop.

ABC News reports campus police shot and killed a Georgia Tech student who they say was advancing on officers with a knife.
Scout Schultz, 21, refused to put down a knife and kept moving toward the officers early Sunday outside a dormitory, according to a statement from the Georgia Bureau of Investigation , using the given name, Scott. The fourth-year computer engineering student used the name Scout and preferred the pronouns "they" and "them" rather than "him" or "her."
"I'm bisexual, nonbinary and intersex," Schultz wrote in a Pride Alliance profile.
WSB-TV reported that the item, still on the ground when the station arrived, appeared to be a half-open multi-tool without any tools extended.