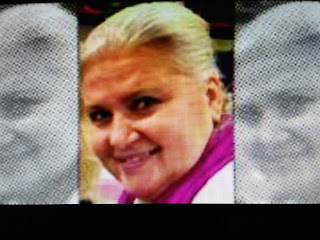 This is a TV movie in the making!  Very intriguing.

ABC News reports authorities in Florida released surveillance video today that, they say, shows a Minnesota grandmother wanted in two killings smiling and chatting up one of her alleged victims in a bar.
Sgt. Anita Iriarte of the Lee County Sheriff's Office in Florida told ABC News the footage from the Smokin' Oyster Brewery showed suspect Lois Riess, 56, wearing a light-blue shirt and with white-gray hair, talking to Pamela Hutchinson.
Hutchinson, 59, was found fatally shot at her motel April 9, according to the Lee County Sheriff's Office. Her cash, credit cards, identification and white Acura had been stolen, police said. Police said the video was taken on April 5, 2018, at 5:40 p.m. in Fort Myers.