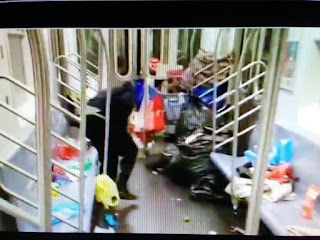 I've been saying for years when so-called Liberals who lie and call themselves progressives take control of government, quality of life suffers.
It's happening in all our major cities.  From the mounds of human faces on the streets of San Francisco to the homeless camps that have become an eyesore in New York, progressives should never be allowed to control government.


Fox News reports repugnant video posted to Instagram last week shows a southbound 2 train at the Allerton Avenue stop in the Bronx that looks like it would be far more at home in the Fresh Kill’s landfill.

Mushrooming mounds of trash — newspapers, plastic bags, and discarded bottles, wrappers, personal belongings — carpet nearly half the car, as the handful of passengers seem oblivious to the revolting conditions