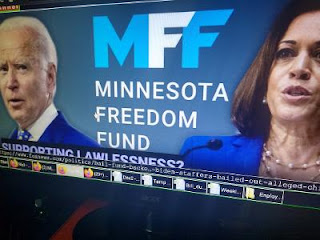 This is what Democrat do.  They let criminals go free and the heck with people's safety.

Biden and Harris cared more fo an criminal than an 8 yr old girl.

Timothy Wayne Columbus, a 36-year-old-man, is charged with first-degree criminal sexual conduct for allegedly penetrating a girl in 2015 when she was about 8 years old. A warrant was issued for his arrest on June 25. But he was later bailed out of jail and according to a court document, filed to have his bail money returned to Minnesota Freedom Fund (MFF), the organization Harris and many Biden staffers asked their followers to donate to during the rioting in Minneapolis earlier this year.

If you’re able to, chip in now to the @MNFreedomFund to help post bail for those protesting on the ground in Minnesota. https://t.co/t8LXowKIbw