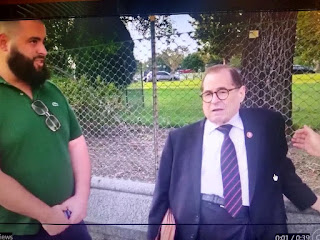 This is the official response coming from Speaker of the House Nancy Pelosi on downward.
The violence going on in Portland, Oregano is not real according to New York Rep. Jerry Nadler.  Don't believe what you’re eyes are seeing on TV and news reports from around the world.
Jerry says it's not real!


I ran into Jerry Nadler in DC and asked him to disavow the Antifa violence/rioting in Portland.